Skip to main content
Share on
ANALYSING SOCIAL DETERMINANTS OF HEALTH INEQUITY
Health is not just the absence of disease. Health and well-being in the broadest sense are achieved by eliminating social inequalities and ensuring that everyone has access to medical care, enough food, clean water, decent living conditions, basic education and gainful employment. These and other factors are classified as the so-called the ‘social determinants’ of health. Snap-shots of these and other specific indicators are used to determine the conditions of peoples’ lives and can be used to guide governments towards introducing policies that are more equitable.
Sir Michael Marmot

Such social determinants of health were discussed   during an IAMP workshop entitled ‘Promoting action   on the social determinants of health’, held in Trieste,   Italy, on 3-4 July 2014.
Over 35 participants from 25 countries attended   including authorities such as Sir Michael Marmot, director of the University College London Institute of Health 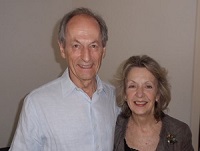 "The determinants of health can serve as markers of social change,"
explained Marmot, one of the authors of the World Health Organization’s 2005 report on this issue. "It is therefore important to develop effective systems to monitor these determinants, which frame the level of social inequality."
But we must distinguish between high-income countries (HICs) versus low and middle income countries (LMICs), especially in the field of public health, continued Marmot. HICs 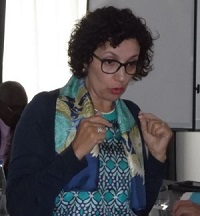 show a prevalent increase in non-communicable diseases (NCDs) such as cancer, obesity and diseases associated with smoking, alcohol consumption and lack of exercise. In LMICs, where, unfortunately, even NCDs are on the rise, the economic burden of healthcare is mainly due to infections and diseases related to poor hygiene, poor food and poor water quality as well as poor access to primary education.
"In developing countries,” added Jessica Allen, “poverty causes stress, anxiety and depression which adversely affect the mental health of children – our future generations.”
“Therefore” continued Ruth Bell, “we need a global movement that stimulates reflection on
these issues.” 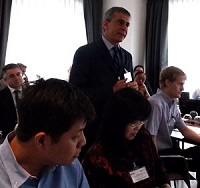 The aim of the IAMP workshop was to gather around the same table scientists – who are familiar with the data – and government representatives – who must draft and carry out the policies to initiate social change. The hope is that, by combining the skills, and using the determinants of health as a litmus test of the well-being of nations, governments can initiate concrete actions that will go beyond simple declarations.
A summary of the workshop appeared in the local Trieste newspaper, Il Piccolo which attracted the attention of local delegates. In addition, IAMP coordinator Peter McGrath and Paolo Villari, professor of hygiene, Department of Public Health and Infectious Diseases, Sapienza University of Rome, Italy, both appeared in a 30-minute interview on local television to explain the workshop and the importance of the social determinants of health.
Concrete outputs of the workshop will be available in due course, and are likely to include documents calling for action by governments and other stakeholders (including a review of our knowledge of the social determinants of health and their impact on inequity), as well as possible regional versions of this training workshop that can reach a wider audience with regards to more countries and greater participation of government officials. 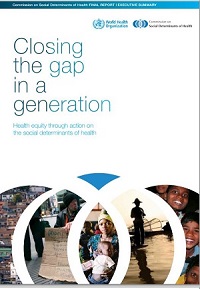