Skip to main content
Share on
IAP has joined with Italy’s national science academy to call for more action to be taken to protect cultural heritage and ‘Art Cities’ from natural disasters.

Some 50 experts from around the globe converged on Rome, Italy, to commemorate the 50th anniversary of the Florence flood and to discuss scientific, technological and political developments over the past half-century that can help to protect cultural heritage and ‘Art Cities’ such as Florence from natural disasters.

The meeting, hosted by the Accademia Nazionale dei Lincei at its headquarters in Rome, took place on 11-13 October 2016, a short time ahead of the 3 November anniversary of the River Arno bursting its banks and drowning much of Florence and its irreplaceable art treasures.

Indeed, in a session dedicated to the events in Florence, Marco Ciatti (director of the Opifico delle Pietre Dure, Florence) described some of the restoration work that has been undertaken, culminating in the 50-year long effort to restore one particular work, Vasari's ‘Last Supper’, which will be presented to the public once again during the forthcoming anniversary celebrations.

The ‘International Conference – Florence 1966-2016 – Resilience of Art Cities to Natural Catastrophes: The Role of Academies’ also saw the presentation of an in-depth report by the International Technical and Scientific Committee (ITSC) convened by the City of Florence. Members of the internationally constituted ITSC have performed an independent assessment of the effectiveness of actions undertaken to reduce the risk of further flooding in Florence. Unfortunately, according to Gerald Galloway (member of the US National Academy of Engineering and chair of the ITSC), “the level of protection existing in Florence at the present time does not provide the level of protection required.” And this is despite the repeated promise to do “Whatever it takes” to prevent such an event happening again – no matter what the cost.

Among the other keynote speakers, Ismail Seragedin (Bibliotheca Alexandrina, Egypt), noted that economic values could be calculated for cultural heritage, while Virginia Murray (vice chair of the UNISDR Science and Technology Advisory Group) noted that safeguarding cultural heritage has been included in the Sendai Framework for Disaster Risk Reduction, which was endorsed by the world’s government in March 2015. Academies of science, and especially the Lincei, she said, played a particularly important role in inserting the concept of protecting cultural heritage into the Sendai Framework.

Academies around the world nominated representative experts to present the situation in their countries during the meeting in Rome. R.B. Singh (India) highlighted problems associated with protecting historic buildings and monuments in New Delhi and Jaipur, while Joseph Adande (Benin) focused on the royal palaces of Abomey and how they had suffered from storms, rain and fire damage.

Other academy representatives included Juan Asenjo (co-chair, IANAS), who noted that Chile has been very successful in minimising damage caused by the regular earthquakes that afflict the country. Other case studies focused on Brazil, Haiti, Greece, Mexico, the Netherlands and Poland.

IAP was represented by co-chair Volker ter Meulen, who noted that all the presentations demonstrated how important it is that science gets involved in reducing the risk of damage from natural disasters and protecting cultural heritage, and how it can provide hope to people that things can be improved. But this will not happen unless scientists – including through the academy networks – can engage with policy-makers. 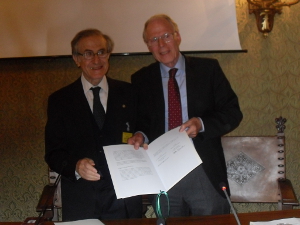 To this end, ter Meulen, representing IAP, and Alberto Quadrio Curzio, president of the Accademia Nazionale dei Lincei, ended the meeting by signing the ‘Charter of Rome on the Resilience of Art Cities to Natural Catastrophes’.

Details of the Charter were presented by Lincei member Giovanni Seminara, coordinator of the conference, who noted that it had been developed by a drafting committee and refined by academy representatives from around the world – many of whom were in attendance in Rome.

The Charter points out that cultural heritage and Art Cities need to have a special status when developing plans for reducing the impacts of natural disasters, said Seminara, and it aims to inform politicians of their responsibilities in this regard. The Charter also notes that academies must also take on activities such as educating the public and raising awareness, promoting additional research and providing a forum for discussing results, and providing advice to policy-makers based on these results in a way that avoids conflicts of interest.

The Charter of Rome will now be presented to the Government of Italy – especially as Italy will host the 2017 meeting of the G7 countries. On this occasion, the G7 academies will also present a statement on disaster risk reduction that will feed into the high-level political discussions. That statement will certainly feature recommendations made in the Charter of Rome, perhaps augmented by additional points that emerged from the Rome meeting.