Every day, people are making decisions that may impact their future. Decisions presumably based on an evaluation of the risks of choosing a or b over c.

Governments, too, must weigh up alternative scenarios, account for the risk involved in each one, and arrive at the best option to feed into policy.

However, the concept of ‘risk’ is not one that is easily communicated to the public or to governments.

To address this issue, the IAP Science Education Programme (SEP) was invited by the National Science Museum of Thailand to participate in a special panel session on ‘Risk Communication on Public Issue: Mosquito-borne diseases – a case study’, held during Thailand’s National Science and Technology Fair on 25 August.

The mosquitoes theme was selected to tie in with a special exhibition in the National Science and Technology Fair, as well as a theme that is being taken up by IAP’s SEP in response to outbreaks and spread of diseases such as Zika, Chikungunya, dengue and yellow fever – all of which are transmitted by mosquitoes.

Yongyuth Yuthavong, Thailand’s former deputy prime minister and a scientist who has spent his career seeking a vaccine for malaria, opened the session by confirming that, for many risks, science and technology (S&T) may provide a solution; in other cases, however, S&T might actually be the cause. One such example mentioned was the insecticide DDT, once used widely and effectively to control malaria-transmitting mosquitoes, but eventually shown to have many adverse environmental effects.

This theme was taken up by Hak-Soo Kim from the School of Communication, Sogang University, Seoul, South Korea, and director of the Policy Research Institute of the Korean Academy of Science and Technology (KAST), who is also chair of the AASSA Special Committee on SHARE (Science, Health, Agriculture, Risk and Environment) Communication.

“There is a continuum between problems and solutions – and an inter-dependence between them,” he informed. “And the side-effects of solutions often lead to new problems. Risk enters the equation as it is a measure of the potential side-effects of a solution.”

Kim added that decision-taking in the face of risk, however, often depends on “tangibility and efficacy”. That is, whether there is a tangible, or instant, reward for a particular choice (e.g. the gratification of smoking a cigarette), compared to any intangible, not-yet-observed, long-term risk (e.g. lung cancer to be caused by smoking cigarettes); and whether or not you can control it, which is the issue of efficacy. “For many potential side effects, or risks, individuals lack of efficacy. One person changing their behaviour cannot affect climate change, for example,” explained Kim. “That’s why we need collective efforts, such as teamwork between scientists and the public, to overcome such risks.”

Dato Lee Yee Cheong, chair of the IAP SEP Global Council, then highlighted that the IAP programme has two arms – promoting science education, especially through inquiry-based methods that teach children to derive conclusions from testing hypotheses and examining evidence; and science literacy, whereby efforts are made to introduce scientific concepts such as risk to the general public. Indeed, it was at a meeting of the Global Council in Chile earlier this year that the topic of mosquito-borne diseases was taken up by the IAP SEP because of growing global concern.

Peter McGrath, IAP coordinator and an entomologist by training, then outlined two projects being developed by the IAP SEP. The first is the aim 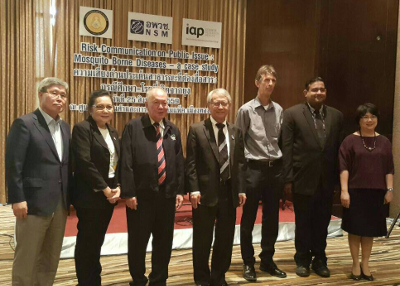 to galvanise the youth to control mosquito populations in their neighbourhoods.

“The Aedes aegypti mosquito that transmits Zika, Chikungunya and dengue, for example, does not fly far,” he explained. “If you are bitten by an adult female, then that female emerged from a source of water no more than 500 metres away. This means that if all potential mosquito breeding sites – such as trays beneath plant pots, old car tyres or tin cans – are kept dry, then A. aegypti populations will crash. However, it would need everyone in a neighbourhood – say a school catchment area – to be vigilant and to check their properties twice each week – every week.”

A trial of this method is currently ongoing in Buenos Aires, coordinated by IAP SEP member in Argentina, Norma Nudelman. The problem however, again comes down to efficacy – what are the ‘instant’ benefits of emptying or treating breeding sites compared to the future advantage of not getting sick?

The other project being developed by the IAP SEP is to design school curricula for K-8 students (aged 5-13) and their teachers that will use inquiry-based science education (IBSE) methods to address the challenges and mitigation of mosquito-borne illnesses. This project is being led by Carol O’Donnell at the Smithsonian Science Education Center (SSEC) in Washington DC – another IAP SEP Global Council member.

The final speaker in the session was Abhi Veerakumarasivam, chair of the Young Scientists Network of the Academy of Sciences Malaysia, and consultant geneticist, Faculty of Medical and Health Sciences, Universiti Putra Malaysia. Veerakumarasivam argued that as well as communicating risk to the public, legislation can be used effectively to control undesired effects. Using the example of bans on smoking in public places in place in much of Europe, the USA and elsewhere, he expects that there will be a large decrease in lung cancer cases caused by secondary smoking.

Returning to the theme of communicating risk to the public, Yuthavong confirmed that messages need to be simple to get the public interested – in other words, there needs to be a ‘hook’. In Thailand, he said, tens of thousands of people are infected with dengue every year, but no-one took much notice. “That is, until a film star died of the disease. Then the public became interested. So the question is, how do we convey our message?”

Addressing this issue, Kim got to the core of the discussion. “To communicate effectively,” he said, “we need to involve the public, to engage them in the teams we put together to tackle our problems, and to develop our messages according to their needs.”

In other words, the target public, the ‘consumers’ and their point of view, must be placed at the heart of any communication efforts.

Among the examples cited of this is an ongoing public debate in Florida on whether or not to release male A. aegypti mosquitoes (which do not bite) that have been genetically modified so that all offspring are sterile. In this way, repeated releases can drive down local A. aegypti populations.  Given that these are genetically-modified mosquitoes, people are wary, but the alternatives include blanket-spraying of insecticides that, apart from killing off non-target insects, will also likely lead to insecticide resistance developing in the mosquito population. Against this background, Florida recently recorded its first case of Zika transmitted locally by a mosquito bite.

The session concluded with Yuthavong expressing his hope that the discussions would lead to concrete actions, perhaps using the expertise at the National Science Museum and in IAP to develop courses to train scientists and science journalists on how to communicate effectively on issues that involve aspects of risk. 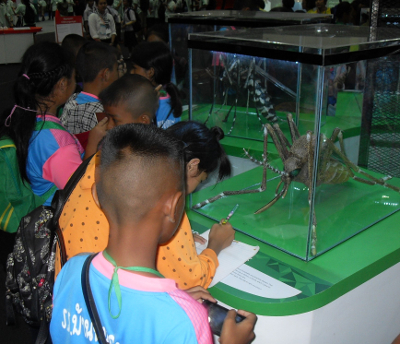 During those 11 days, more than half-a-million schoolchildren from around the country are expected to visit the specially-designed exhibits. Among the displays are one that focuses on climate change and biodiversity, another on biotechnology, one on materials of the future, one on robotics and automation, while another introduces children to the biology of eggs – whether laid by insects, fish, reptiles, birds or dinosaurs. The ‘Living with Mosquitoes’ exhibition mentioned above was another.

“This is the largest S&T event of the year in Thailand,” explains Aphiya Hathayatham, vice president of the National Science Museum and member of the IAP SEP Global Council for Thailand. “Among its main objectives are to disseminate information about research and the advancement of domestic and international science, technology and innovation. We also aim to promote public awareness of science, and to encourage education and career development in S&T.”

IAP provided some funding for the session on ‘Risk Communication on Public Issue: Mosquito-borne diseases – a case study’.

A video of the session is available here.