Skip to main content
Share on
Clinical trials for heritable genome editing could be permitted in the future, but only for serious conditions under stringent oversight, says a new report from the National Academy of Sciences and National Academy of Medicine.

WASHINGTON – Clinical trials for genome editing of the human germline – adding, removing, or replacing DNA base pairs in gametes or early embryos – could be permitted in the future, but only for serious conditions under stringent oversight, says a new report from the National Academy of Sciences and the National Academy of Medicine.  The report outlines several criteria that should be met before allowing germline editing clinical trials to go forward.  Genome editing has already entered clinical trials for non-heritable applications, but should be allowed only for treating or preventing diseases or disabilities at this time. 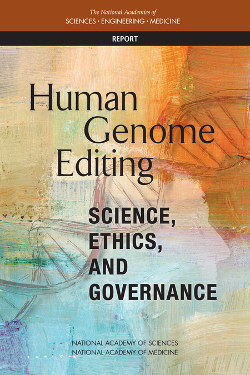 Genome editing is not new.  But new powerful, precise, and less costly genome editing tools, such as CRISPR/Cas9, have led to an explosion of new research opportunities and potential clinical applications, both heritable and non-heritable, to address a wide range of human health issues.  Recognizing the promise and the concerns related to this technology, NAS and NAM appointed a study committee of international experts to examine the scientific, ethical, and governance issues surrounding human genome editing.

Human genome editing is already widely used in basic research and is in the early stages of development and trials for clinical applications that involve non-heritable (somatic) cells.  These therapies affect only the patient, not any offspring, and should continue for treatment and prevention of disease and disability, using the existing ethical norms and regulatory framework for development of gene therapy.  Oversight authorities should evaluate safety and efficacy of proposed somatic applications in the context of the risks and benefits of intended use.

However, there is significant public concern about the prospect of using these same techniques for so-called “enhancement” of human traits and capacities such as physical strength, or even for uses that are not possible, such as improving intelligence.  The report recommends that genome editing for enhancement should not be allowed at this time, and that broad public input and discussion should be solicited before allowing clinical trials for somatic genome editing for any purpose other than treating or preventing disease or disability.

“Human genome editing holds tremendous promise for understanding, treating, or preventing many devastating genetic diseases, and for improving treatment of many other illnesses,” said Alta Charo, co-chair of the study committee and Sheldon B. Lubar Distinguished Chair and Warren P. Knowles Professor of Law and Bioethics, University of Wisconsin-Madison.  “However, genome editing to enhance traits or abilities beyond ordinary health raises concerns about whether the benefits can outweigh the risks, and about fairness if available only to some people."

Germline genome editing, in contrast, is contentious because genetic changes would be inherited by the next generation.  Many view germline editing as crossing an “ethically inviolable” line, the report says.  Concerns raised include spiritual objections to interfering with human reproduction to speculation about effects on social attitudes toward people with disabilities to possible risks to the health and safety of future children.  But germline genome editing could provide some parents who are carriers of genetic diseases with their best or most acceptable option for having genetically related children who are born free of these diseases.

Heritable germline editing is not ready to be tried in humans.  Much more research is needed before it could meet the appropriate risk and benefit standards for clinical trials.  The technology is advancing very rapidly, though, making heritable genome editing of early embryos, eggs, sperm, or precursor cells in the foreseeable future “a realistic possibility that deserves serious consideration,” the report says.  Although heritable germline genome editing trials must be approached with caution, the committee said, caution does not mean prohibition.

At present, heritable germline editing is not permissible in the United States, due to an ongoing prohibition on the U.S. Food and Drug Administration's ability to use federal funds to review “research in which a human embryo is intentionally created or modified to include a heritable genetic modification.”  A number of other countries have signed an international convention that prohibits germline modification.

If current restrictions are removed, and for countries where germline editing would already be permitted, the committee recommended stringent criteria that would need to be met before going forward with clinical trials.  They include: (1) absence of reasonable alternatives; (2) restriction to editing genes that have been convincingly demonstrated to cause or strongly predispose to a serious disease or condition; (3) credible pre-clinical and/or clinical data on risks and potential health benefits; (4) ongoing, rigorous oversight during clinical trials; (5) comprehensive plans for long-term multigenerational follow-up; (6) continued reassessment of both health and societal benefits and risks, with wide-ranging, ongoing input from the public; and (7) reliable oversight mechanisms to prevent extension to uses other than preventing a serious disease or condition.

Policymaking surrounding human genome editing applications should incorporate public participation, and funding of genome editing research should include support to study the socio-political, ethical, and legal aspects and evaluate efforts to build public communication and engagement on these issues.

The report recommends a set of overarching principles that should be used by any nation in governing human genome editing research or applications:

“Genome editing research is very much an international endeavor, and all nations should ensure that any potential clinical applications reflect societal values and be subject to appropriate oversight and regulation,” said committee co-chair Richard Hynes, Howard Hughes Medical Institute Investigator and Daniel K. Ludwig Professor for Cancer Research, Massachusetts Institute of Technology.  “These overarching principles and the responsibilities that flow from them should be reflected in each nation’s scientific community and regulatory processes.

Such international coordination would enhance consistency of regulation.”

Copies of the report are available at: https://www.nap.edu/catalog/24623/human-genome-editing-science-ethics-and-governance

The National Academy of Sciences (NAS)