Skip to main content
Share on
The IAP Science Education Progamme (SEP) convened a series of meetings recently in Khartoum, Sudan (5-9 February 2017). As well as the regular annual meeting of the SEP Global Council, there was a two-day Inquiry-based Science Education (IBSE) Policy Forum. Either side of this was an IBSE training session for science teachers from Sudan.

As well as the regular annual meeting of the SEP Global Council, there was a two-day Inquiry-based Science Education (IBSE) Policy Forum (7-8 February). Either side of this was an IBSE training session for science teachers from Sudan.

Before these sessions kicked off, however, a high-level panel welcomed the delegates – a mixture of international members of the IAP SEP Global Council, academicians from Sudan, teacher trainers from Malaysia, and science teachers from Sudan and Egypt, some 80 in total.

In his opening address, Mohamed Hassan, president of the Sudanese National Academy of Sciences (SNAS), highlighted the fact that ‘Quality Education’ was not only a stand-alone Sustainable Development Goal  (SDG4), but it also underpins the chances of successfully achieving the other 16 SDGs. He also highlighted the fact that science education should not finish with the end of formal schooling, and called for the establishment of Sudan’s first science museum as a way of engaging the wider public on scientific issues. 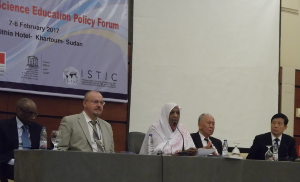 Dato Lee Yee Cheong (Malaysia), chair of the IAP SEP Global Council, said that it was not enough for the scientific communities in developing countries to embrace IBSE, but that they also need to engage their Minister of Education and UNESCO. “In Malaysia we now have strong governmental support,” he said, “and our IBSE trainers are now spreading their wings abroad, such as here in Sudan.”

IAP for Health was represented in the opening session by its co-chair, Depei Liu (China), who also acts as president of the InterAcademy Partnership. He reiterated that science education was important to IAP – noting that it was highlighted as a major goal in its current strategic plan.

Pavel Kroupkine, head of the UNESCO office in Khartoum, then read out a welcome message from the UNESCO Director-General, Irina Bokova. She noted that UNESCO’s International Basic Sciences Programme (IBSP) is now considering taking up science education as part of its remit, and that there was a need for science education to be more hands-on, more inclusive and more linked to policy.

Completing the welcome session, Suad Abdel-Raziq, Sudan’s Federal Minister of General Education, highlighted that Sudan had an integrated strategy for education that was jointly developed with the Ministry if Higher Education. “Science education is a priority,” she noted, “including building the capacity of science teachers, for example by providing science kits to schools across the country,” and she confirmed that IBSE is an approach that her Ministry is looking at seriously to help improve results.

Dato Lee Cheong introduced the Policy Forum on ‘Science Education and the Fusion of Civilisations’ by highlighting that it was about showing how knowledge and technologies arose in and spread between different cultures, and that all cultures have contributed to lifting up the human condition. “At a time of polarization between supporters of some religions and other divisive beliefs, there is a need for dialogue and tolerance,” he said. “Building on the Chinese One Belt-One Road initiative, for example, we can use science education to bring people closer together.”

The session then continued with three speakers from countries based along the ancient Silk Road: Sun Xiaochun from China, K. Ramasubramanian from India, and Moneef Zou’bi from Jordan.

Each in turn summarized not only the contributions of their country/region to global knowledge, but also how interaction and communication between the regions had diffused such knowledge, especially along ancient trade routes. Xiachun and Ramasubramanan, in particular, highlighted some ancient examples of astronomical technology, including the Ulugh Beg Observatory, built in 1420s in Samarkand, Uzbekistan.

In the Global Council meeting that followed the Policy Forum, it was agreed that a working group would convene in China before the end of the year to define a concrete plan on how such parallels can be developed into suitable IBSE curricula.

The session itself was completed by Pierre Léna, who gave some practical examples of IBSE curriculum design based on the experiences of his organization, France-based La Main à la Pâte (LAMAP).

With the establishment of the InterAcademy Partnership in 2016, ongoing projects and programmes are now starting to integrate. One example of this is the addition of a representative of IAP for Health, Mario Stefanini (Italy), to the IAP SEP Global Council.

The project, led by the Accademia Nazionale dei Lincei, has been running for several years and is following a cohort of primary school children in four primary schools in the Rome region as they learn – in interactive ways – about their body, how it works, and how to keep it healthy.

The aim of the project is to make children aware that developing good eating habits and exercising at an early age can develop into long-term benefits as they grow and age.

IAP for Health has contributed financially to the SCIESA project. Annual summaries of the curricula presented to the children together with pedagogical notes are available in I-English, I-Italian and II-English, II-Italian.

Also presenting in the session in Khartoum was IAP coordinator, Peter McGrath. He introduced a new project being led by another IAP SEP Global Council member, Carol O’Donnell of the Smithsonian Science Education Center (SSEC), ‘IAP SEP IBSE Curriculum Design Program on Zika and other Mosquito Borne Diseases’. The project, which has just kicked off, aims to develop curricula for primary and middle-school-aged children so that they develop an awareness of the dangers of mosquitoes and the diseases they transmit, and how they can reduce the risks of becoming infected. During the one-year project, the curricula developed will be tested, refined and then also translated into Spanish before being made freely available for download.

Pierre Léna then highlighted the urgency of educating children about climate change and how, using the model of the SSEC/mosquito project along with the scientific rigour of the IAP network and the Intergovernmental panel on Climate Change (IPCC), new curricula could be developed.

The session concluded with reports from Ali El Tahir (Sudan) and Youssry Fouad Saweris, Counsellor of Science, Ministry of Education, Egypt, on how IBSE was being taken up and rolled-out in these two countries linked by the River Nile. 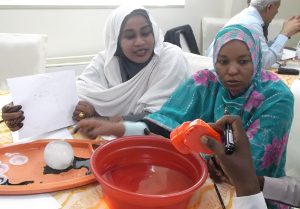 Either side of these events, some 30 Sudanese science teachers plus three from Egypt were trained in the use of IBSE in the classroom.

The workshop, which unfolded over four days, was supported by the Malaysia-based International Science, Technology and Innovation Centre for South-South Cooperation (ISTIC) and the Regional Centre for Education in Science and Mathematics (RECSAM), Khartoum-based Future University and LAMAP.

By working through practical experiments and learning how to guide pupils’ questions relating to the scientific principles involved, the teachers gained first-hand experience of using IBSE as well as the theoretical knowledge required to implement it in their own classrooms. 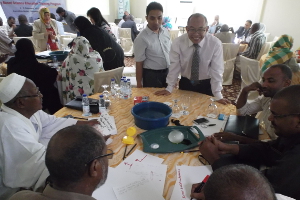 Even so, as the course organizer, Sharifah Maimunah (Malaysia), confirmed, the teachers would need two additional such workshops before they became fully proficient in using IBSE and were able to start teaching other colleagues how to use it. ISTIC and its partners already has plans in place to return to Sudan to conduct such additional training exercises.

Overall, the different events of the week stimulated lively discussions and, especially thanks to the deliberations of the Global Council, there are many follow up actions to be implemented in the coming months.