Skip to main content
Share on
The meeting, which brought together more than 700 researchers and other stakeholders, aimed at developing a roadmap on how best science and technology can help achieve the implementation of the 2015 Sendai Framework ...

The UNISDR Science and Technology Conference on the implementation of the Sendai Framework for Disaster Risk Reduction 2015-2030 took place on 27-29 January 2016 in Geneva, Switzerland.
The meeting, which brought together more than 700 researchers and other stakeholders, aimed at developing a roadmap on how best science and technology can help achieve the implementation of the 2015 Sendai Framework. 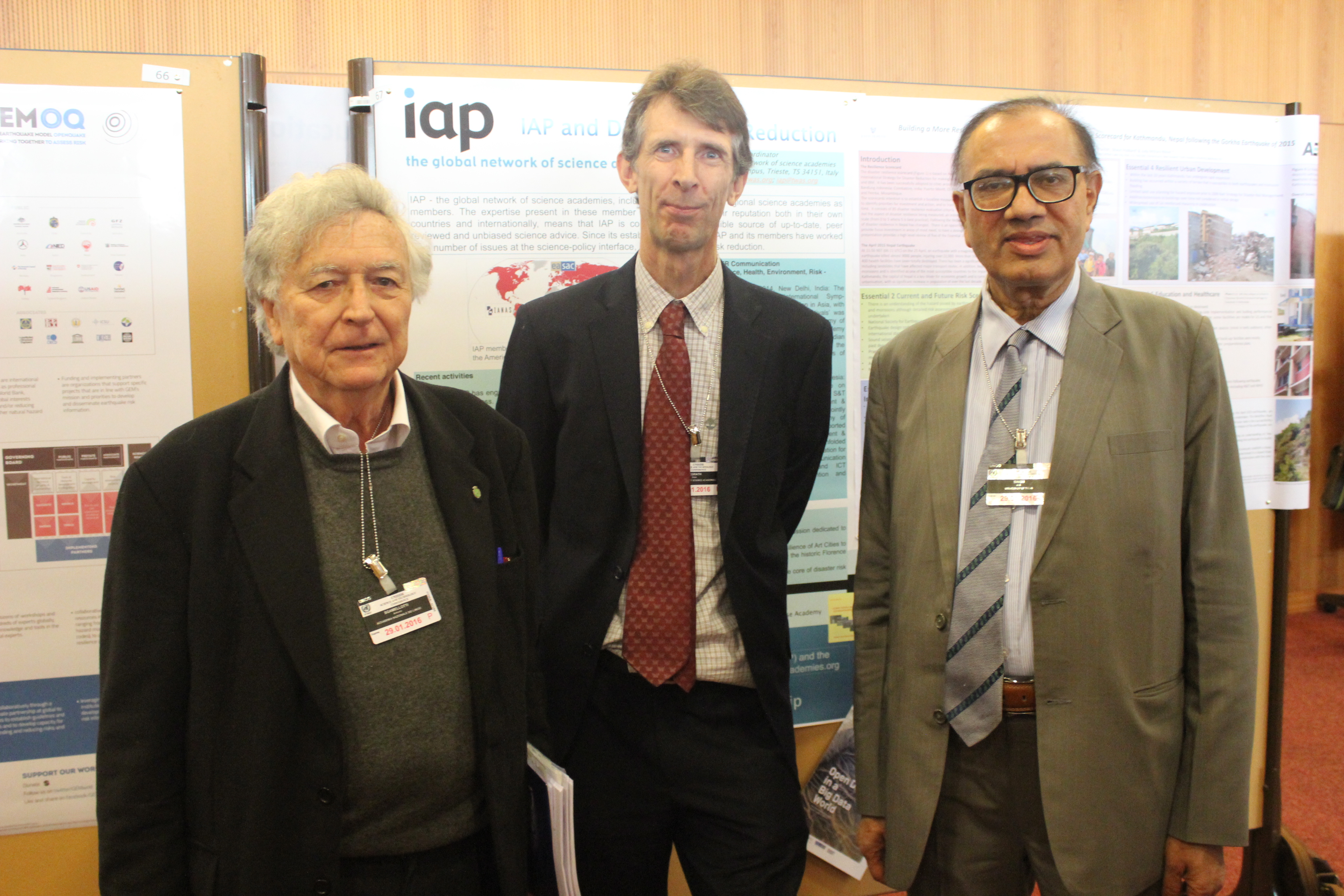 IAP, one of the co-organizers of the conference, was represented by IAP Coordinator, Peter McGrath, as well as R.B. Singh from India, who has been appointed by IAP to link with the UNISDR science process. Also present were Antonio Sgamellotti from the Accademia Nazionale dei Lincei, Italy, who was promoting a conference to be held in Rome later this year that will commemorate 50 years since the flooding of Florence and investigate the resilience of ‘art cities’ (see HERE for more information).

IAP also supported the participation of two young scientists, Romana Siddiqi, nominated by the Bangladesh Academy of Sciences, and Abdelsalam Badre from Morocco, nominated by the Global Young Academy (GYA).
Examining common themes that emerged from the four conference workstreams, breakout groups and side events, it became clear that there is a not only a need to address gaps in our scientific knowledge of various kinds of disasters (including landslides and how best to use ‘big data’), but also how current knowledge can best be presented to policy-makers in order for them to be able to make informed decisions. In addition, both policy-makers and scientists must communicate to the at-risk public. As José Rubiera, Director, National Forecast Centre, Cuba, pointed out in the opening session: communication to the public must be clear, they must know how they should react.

A schematic summary of the discussions could be something like this: 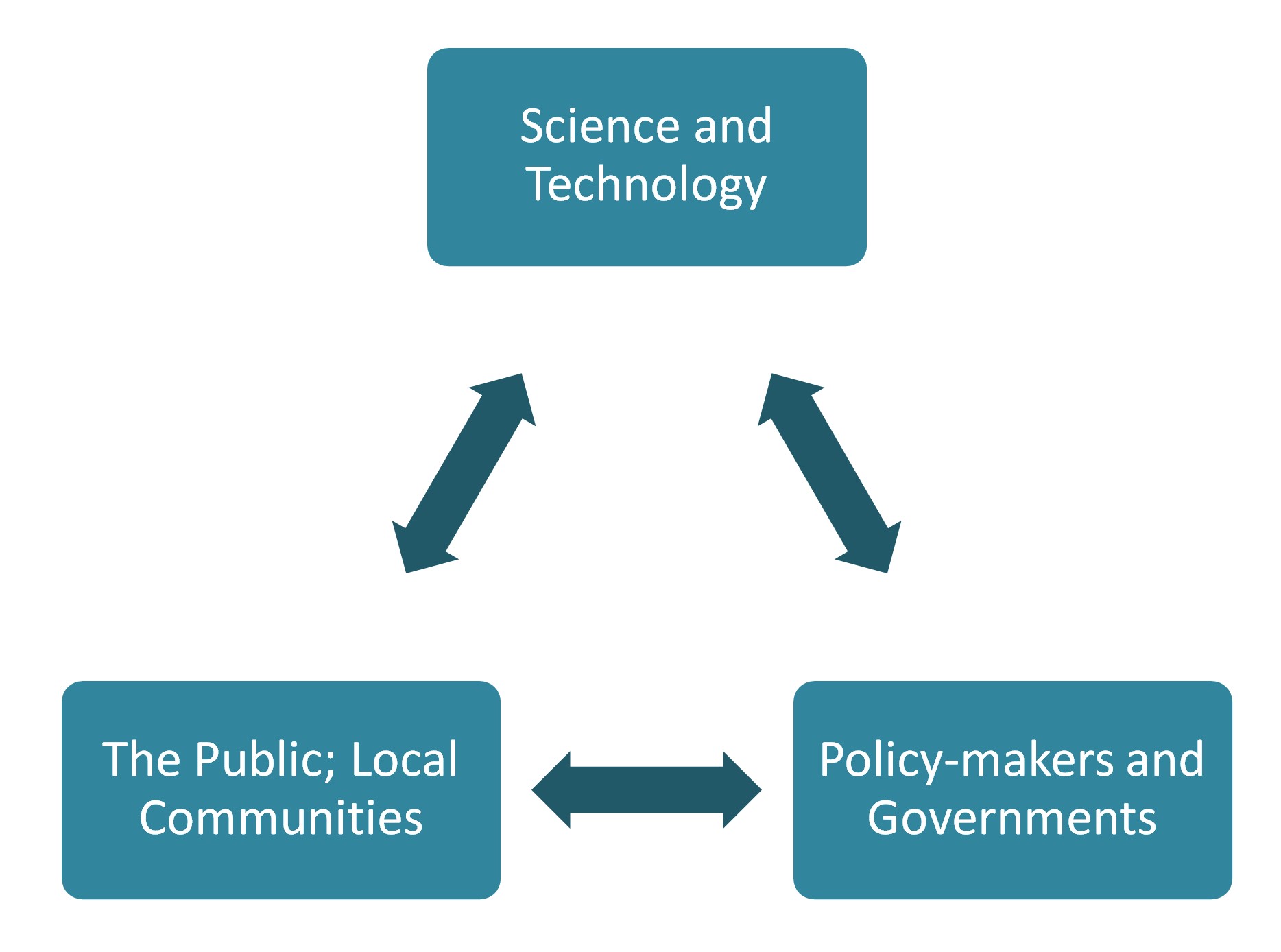 Among IAP’s major goals is to transfer (conference participant Stephan Lechner of the JRC  used the word ‘translate’) scientific information to (for) policy-makers. Another major activity is the IAP Science Education/Science Literacy Programme. In both cases, there are clear synergies where IAP and its member academies can get involved in the implementation of the Sendai Framework.
For the moment, there is still the opportunity for academies and other organizations to contribute to the draft UNISDR Science and Technology Roadmap or to get involved in the Scientific and Technical Partnership. As Rober Glasser, Assistant Secretary-General and Special Representative of the Secretary-General for Disaster Risk Reduction at the UNISDR, confirmed in the closing session of the conference, more than 65 organizations and institutions have already signified their intention to join the partnership.
Another possibility that could be considered by academies is the offer presented by Integrated Research on Disaster Risk (IRDR), which will support the creation of national scientific advisory capacities. Taking up such an offer could improve links between academies and their governments, as well as helping to build capacity in small or newly-established academies.
There will be an opportunity for academy representative to discuss these issues at the forthcoming IAP Conference in Hermanus, South Africa (28 February - 1 March 2016), when  Virginia Murray, vice-chair of the UN International Strategy for Disaster Reduction (ISDR) Scientific and Technical Advisory Group, will participate in the session on ‘Science Advice in Times of Disasters/Emergencies’.

The call for interest for institutions/organizations, networks and platforms to join the Science and Technology Partnership is available HERE. IAP member academies are encouraged to sign up.

For more information, visit the website of the UNISDR Science and Technology Conference on the implementation of the Sendai Framework for Disaster Risk Reduction 2015-2030.

Read more on the events HERE
Reports from IAP-supported young scientists are now available as follows:

Highlights and comments from the conference can also be viewed on the Twitter feed: #science4sendai.