Its stated objectives include the following : a) Serving as a meeting-place for  distinguished scholars and providing them  with  the opportunity for promoting research in different fields of intellectual and scientific  activity as well as exchanging ideas and experience.

b) Bringing together the leading scientific  figures and enabling them to promote research in different scientific  and cultural areas and exchange information in order  to keep in touch with   the   latest   developments  in  the   world  of  sciences  in  coordination  with   similar institutions all around the world.

c) Contributing, through co-ordination with  similar  institutions  having  the  same vocation

around the  world, to the enrichment of the Arabic language, seeing to it that  it is correctly used, bringing  together and developing its full  potential for  keeping  abreast  with  sciences and arts.

d) Helping to safeguard the national cultural heritage through  research and publication.

f) Organizing symposiums  and conferences  about  those fields that  come within the remit  of the Academy.

g) Encouraging creativity and the distribution of intellectual and artistic  works.

h) Giving opinions  on those  issues that  are part  of its responsibilities and which  might  be sought  by the competent controlling authority or any other  ministerial department or' institution. The Academy  could  also take  the  initiative of  self-reliance and make recommendations on topical issues whenever it deems it necessary.

The Academy elects freely its members, and the President is elected among his peers.

The relationship and  role  of  the  government in respect  to  the  Academy  is financial,  the

The Academy compiles dictionaries, encyclopedias  and translating works and has an editing activity; it publishes about 15 books annually.

The  Tunisian   Encyclopedia   is   an   open   electronic   encyclopedia, titled   "mawsouaa" (http: //www.mawsouaa.tn/wiki/ ), edited  in Arabic, and it aims  to promote the language, the  Tunisian  history, culture, herita ge and  achievements  in  all fields (science, literature, arts). It   is hosted in the Academy website.

Public Lectures are given by members  of the  Academy and invited speakers; they are open to the  public  and aim  to promote science culture. The lectures given  during  the academic year are gathered in a volume  and published in the language used and in Arabic. 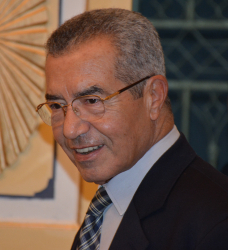