Skip to main content
Share on
Join the The National Academies of Sciences, Engineering and Medicine on 19 November 2020 (11:00AM - 12:30PM ET): register here.

The current COVID-19 pandemic has significantly disrupted formal mechanisms for international cooperation, knowledge exchange, people-to-people interactions and trainings. With most travel halted and many conferences canceled or postponed, the STEM workforce has lost its most effective mechanism to network and pursue new collaborations. Since the basic nature of the next generation of collaborations is based on access of data and is distributed along the nodes of power of science, we are currently witnessing a collapse of the global scientific enterprise to centers of excellence  in the U.S., Europe and China, leaving behind countries from the global south. The current pandemic will only be resolved if all countries (North and South) are engaged; therefore, the need for a concerted convergence research effort to address the current pandemic through international cooperation is more urgent than ever.  The Policy and Global Affairs’ Capacity and Network themes of the National Academies of Sciences, Engineering, and Medicine are launching a new webinar series to enable the community to have a dialog and learn from world experts the impact the pandemic is having on international scientific collaborations.

Bio Sketch: Caroline S. Wagner is an Associate Professor at the John Glenn College of Public Affairs in Ohio State University. She conducts research in the field of science and technology and its relationship to policy, society, and innovation, with a particular focus on international collaboration. Prior to joining Ohio State’s faculty in 2011, Dr. Wagner was a policy analyst working with and for government in a career that spanned more than thirty years and three continents. She worked twice as staff member for the U.S. Congress, once as a Professional Staff Member for the Committee for Science, Space, and Technology, and once as an analyst for the Congressional Office of Technology Assessment. With the U.S. State Department, Dr. Wagner was stationed for two years at the U.S. Embassy in Seoul, South Korea as an economic officer reporting on technological change in Asia. Dr. Wagner is a Distinguished Fellow of the American Association for the Advancement of Science and an elected member of the Council on Foreign Relations. She serves as a consultant to the United Nations for the Sustainable Development Goals, and has served as a consultant to the Organization for Economic Cooperation and Development. Professor Wagner received her Ph.D. in Science & Technology Dynamics from Amsterdam School of Communications Research, University of Amsterdam.

Bio Sketch: Malik Maaza  is a native of North Africa, holds a PhD in wave-matter neutron optics from the University of Paris-VI, is  the current incumbent, in South Africa, of the UNESCO UNISA-ITLABS-NRF Africa Chair in Nanosciences & Nanotechnologies and the chairman of the African Network of Excellence; the Nanosciences African Network. He is a joint staff of the University of South Africa and the National Research Foundation of South Africa. He is a fellow of various Academies, including the African Academy of Science, the Islamic Academy of Sciences, the European Academy of Arts & Sciences as well as the National Academy of Science of India & the Royal Society of Chemistry. 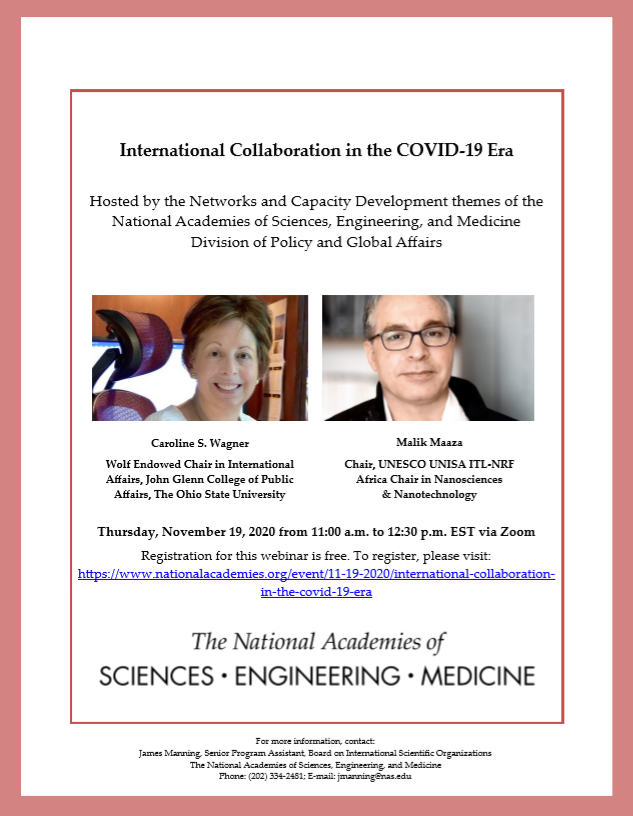 The National Academy of Medicine (NAM)

The National Academy of Sciences (NAS)