Skip to main content
Share on
A report of the workshop session at the World Health Summit, Berlin, October 2015
Of all the emerging or re-emerging infections that affect humankind, some 70% are either vector-borne or zoonotic. That is, we become infected for example through the bites of mosquitoes or other insects, or the disease agent resides in a reservoir host, which could either be a domestic or a wild animal, and ‘spills over’ into the human population. Dealing with the use of antibiotics in animal production, their misuse in medicine, as well as their widespread dispersal in and impact on the environment are also growing challenges. And there are other issues, too, at the nexus of human, animal and environmental health, including the effects of pesticides on the health of pollinators.
There is therefore a need to look at human health from a holistic viewpoint – hence the idea of ‘One Health’ that has emerged over the past 10-15 years. Basically, One Health practitioners look at the intersections and overlaps between human health, animal health and environmental health, and One Health activities should result in
added value in terms of better health for people, animals and the environment, as well as financial savings.
It is probably fair to say that this concept has taken hold among the animal and environmental health communities more so than the human health community, and also in the developing world more so than in developed countries where infectious diseases are nowadays of lesser concern. However, as global epidemics such as SARS and avian flu, as well as the recent Ebola outbreak in West Africa tell us, high-income countries with robust health services cannot ignore emerging diseases of zoonotic origin.
For these reasons, IAMP teamed up with the Robert Koch Institute (RKI), Berlin, and the World Wide Fund for Nature (WWF-Germany) to organize a special session on ‘One World – One Health’ at the recent World Health Summit in Berlin, aiming to impress on the largely medical/human health audience the importance of thinking about global health through the One Health lens.
The session was chaired by Detlev Drekhahn, president of WWF-Germany, Lothar Wieler, president of the RKI, and Peter McGrath, coordinator of IAMP.
The opening presentation by Esther Schelling of the Swiss Tropical and Public Health Institute, set the scene, presenting One Health in its historical context. The history of medicine shows that the early pioneers practiced both human and animal medicine,  she said, citing examples from ancient Babylonia and Egypt. In more modern times, dissection of animals and comparative anatomy played an important role in human medicine, especially surgery, and it was only in 18th-century France, when the first dedicated veterinary school was established, that the disciplines began to drift apart. (Presentation)
The aim now is to foster further collaboration and exchange between disciplines under the One Health banner, confirmed Schelling, who noted that, in 2010, the Food and Agriculture Organization of the United Nations (FAO), the World Organization for  Animal Health (OIE) and the World Health Organization (WHO) had produced a tri-partite concept note to this effect.
A series of three talks then delved deeper into various One Health and eco-health issues. First, Fabian Leendertz, a research leader at RKI (and whose search for the reservoir of Ebolaviruses featured in the October 2015 issue of National Geographic) outlined how diseases can spread from domestic animals (such as camels in the ongoing MERS outbreak in the Middle East), peri-domestic animals such as rats and mice – noting that perhaps even some species of bat can be considered peri-domestic – as well as wild animals.
“Concerning wild animals, the consumption of bushmeat is a major concern when considering emerging infections,” said Leendertz. “Although until we can provide alternative sources of protein to those who depend on it, there is little we can do to restrict such practices.”
Much of Leendertz’s research focuses on the great apes, gorillas and chimpanzees, including the chimps of Gombe National Park made famous by Jane Goodall. “The knowledge we have of these chimps, and the fact that we can follow them so closely, makes them an excellent subject for studying disease transmission patterns,” confirmed Leendertz.
Tom Gillespie, Emory College of Arts and Sciences, USA, followed this thread by discussing environmental changes and how they can affect the likelihood or rates at which diseases may spill over into the human population. Deforestation, in particular, is a concern as it allows humans to access parts of countries that have been sparsely populated till now – bringing them in closer contact with unknown vectors of unknown viruses and other pathogens, as well as new sources of bushmeat. (Presentation)
“The pattern of deforestation can also be important,” added Gillespie, whose team has modelled the influence of habitat fragmentation on disease transmission, “with greater likelihood of transmission occurring from or within habitat patches of an intermediate size rather than remnant pockets of forest or large swathes of intact forest.”

In her presentation, Ilka Herbinger, WWF-Germany, took these ideas further, exploring the concept of eco-health, also with particular focus on the great apes.

“Although diseases can spread from apes to humans, the reverse is also possible,” she said. “Given the endangered situation of these animals, it is important that we do all we can to safeguard against so-called reverse zoonosis, or the transmission from humans to animals.” For these reasons, a series of practices, such as the wearing of masks, keeping to a distance of 7 metres or more, and keeping a dedicated change of clothes for periods of time spent within the apes’ habitat, have been implemented for eco-tourists and park guides and wardens alike.

Such eco-tourism ventures that also involve taking care of the health and livelihoods of the local people, seem to be successful in maintaining the populations of these highly endangered animals – another advantage of taking a holistic One Health/eco-health approach.

“The One Health Platform,” informed Osterhaus, “is a strategic forum of stakeholders and a reference network that aims to enhance understanding of and preparedness for current and future outbreaks of zoonoses, emerging infectious diseases in humans and animals, and antimicrobial resistance.” Among its objectives is to provide a forum for researchers, early career investigators, governmental and non-governmental institutions, international organisations and the private sector to foster cross-sectoral collaborations; to identify and prioritise One Health research gaps; to disseminate the results and insights of existing and new One Health research projects; to establish an information reference centre for the One Health community; and to facilitation interactions and promote education and training, including between the  research community and in the policy arena, to enhance awareness of the value of the One Health approach.

Among the issues raised in a discussion by WHS attendees crowded into the workshop, were the need to build local capacity in One Health research, including the development of dedicated courses, such as at the masters level, to give students a holistic overview of the ideas inherent in the One Health approach.

Rajae El Aouad, director of the National Institute of Hygiene of Morocco and member of the Hassan II Academy of Sciences and Technology, who coordinated the monitoring of avian influenza viruses across Morocco, also advised IAMP, the One Health Platform and other partners to gather evidence and develop case studies regarding the economic benefits of the One Health approach. This would not only convince donors to fund more cross-disciplinary research, she said, but also convince policy-makers to take recommendations on board.

A member of the audience who declared himself to be from the German media, also recommended to reach out to the press, as the One Health issue carries a powerful message: ‘Fear’ – especially in the light of the Ebola epidemic and the ‘next big one’.

“Reaching out to policy-makers is the key,” confirmed Osterhaus, “and it is for this reason that we had a special session at the 3rd International One Health Congress last March in Amsterdam especially to present the science them. I’m pleased to report that it was very well attended and that we will organize something similar during the 4th International One Health Congress and 6th Biennial Conference of the International Association for Ecology and Health when we meet in December 2016 in Melbourne, Australia.” 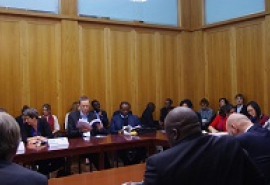 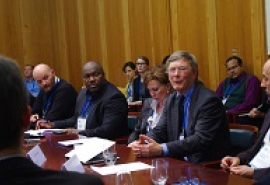 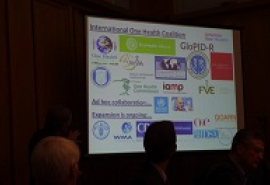 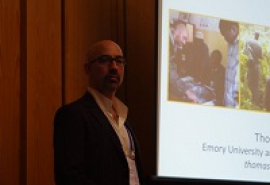