The concept of ‘One Health’ has been defined as “the collaborative effort of multiple disciplines – working locally, nationally and globally – to attain optimal health for people, animals and the environment.”

Modern science has led to significant advances in both medical research and practice as well as veterinary research and practice and there is a growing realization that the two areas are inextricably linked. Epidemics such as the SARS virus outbreak of 2003 and the new variant Creutzfeldt-Jakob (vCJD) that derived from the bovine spongiform encephalitis prion (so-called ‘mad cow disease’), for example, both emerged from animals. Likewise, the 2013-2015 Ebola virus epidemic in West Africa has been traced to an origin in bats, and the injudicious use of many antimicrobial drugs in both medicine and animal husbandry is leading to a crisis of antimicrobial resistance.

As our global population continues to grow, increasing demands are placed on the environment for food production and living space. Pristine areas of  natural  environments are increasingly encroached upon, while there is continuous pressure to increase production efficiency and yields of both livestock and crops.

These pressures create an environment in which closer interactions between humans and animals result in the transmission and propagation of pathogens as well as the cycling between organisms of chemicals such as antibiotics and other drugs, as well as compounds used in crop protection.

Despite recent calls for greater integration between the animal and human healthcare sectors, however, the concept of One Health’ has yet to enter the mainstream and many researchers, physicians and veterinarians are unaware of this new ‘holistic’ vision.

By working with its member academies, IAMP is building awareness of the One Health issue among the medical and animal health research and practitioner communities around the world. 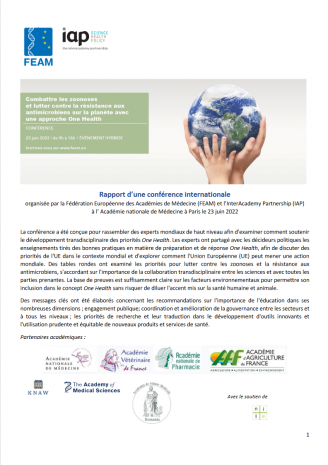 Workshop Summary (2015), published by the US National Academies Press

IAP for Health endorsed the ‘Bucharest Declaration on the One Health Concept’ that emerged from the FEAM Spring Conference hosted by the Romanian Academy of Medical Sciences (12-13 May 2014).