Skip to main content
Share on
The toll from falsified and substandard medical products may be as high as a million lives lost per year: The InterAcademy Partnership (IAP) recommends a set of actions and urges politicians and all stakeholders to join forces and solve this urgent issue.

TRIESTE, ITALY. Falsified and substandard medical products – products such as vaccines, medical devices and veterinary products that are ‘fake’ or of poor quality – are an increasing global scourge that threaten life, health and security in significant ways. This is because patients receiving these products not only get ineffective treatment but are also often exposed to serious harm.

Today, under the InterAcademy Partnership (IAP), medical, scientific and engineering academies from around the world urge political decision-makers at all levels, in concert with regional and international organisations, to work with medical product regulatory authorities, national and international law enforcement agencies, manufacturers, importers, distributors, health professionals and patients to solve this urgent issue.

The new IAP Statement ‘A Call to Action: Furthering the fight against falsified and substandard medical products’ (available online at www.interacademies.org/medical_products) supports the call for a comprehensive, well-resourced, international effort to address this devastating problem.

A GLOBAL  PROBLEM. It is difficult to give precise numbers but it appears that in many low-income countries a large proportion of the medical products available are falsified or substandard.  Estimates of 20-30% in some African and Asian countries seem realistic. Some estimates for particular products are even higher, including an extremely worrisome 30-50% for anti-malarial drugs in south-east Asia. Of note, some 50% of all reports of substandard and falsified medicines received by the WHO Global Alert system are from sub-Saharan Africa, and 80% of these are for essential medicines like anti-malarials and antibiotics.

High-income countries are also impacted. For example, in the United States, several instances of falsified dugs are detected each year.  The US Food and Drug Administration (FDA) has launched an alert system, publishing these cases to warn the public. In Europe, a link has been established between unregulated distribution chains and the number of falsifications detected. Some 50% of the products proposed for sale on the internet are also believed to be false.

“The right of people to health is unalienable: manufacturing, carrying, stocking and selling falsified and substandard medical products, including drugs, vaccines, medical devices, and other medical products are crimes. Due to their severe consequences on public health and individual healthcare, these crimes must be prosecuted and punished to the fullest extent possible,” said Yves Juillet, member of the French National Academy of Medicine, who co-chaired the working group responsible for preparing the statement.

WORLD ACADEMIES’ RECOMMENDATIONS. Given that this activity affects every country in the world, IAP emphasises that governments, regulatory authorities and industry must oversee and regulate the supply chain effectively. The continuity of the supplies of medical products must be always guaranteed, especially in countries most burdened by the problem of falsified and substandard drugs.

The IAP Statement strongly affirms the importance of warning the public about the risk of buying prescription medicines over the internet and of advising online purchase only through certified internet pharmacies. It also decries the delays and the insufficient resources invested in this fight, and underscores the fact that the prevention of this threat requires improved access to legitimate, quality medical products, including equitable pricing policies and better healthcare coverage.

IAP recommends strong consideration of a substantive, comprehensive and well-resourced policy and programme to address this scourge as a priority action of national authorities and international organizations in charge of public health.

Lastly, IAP agrees that the World Health Organization (WHO) is uniquely situated, through its membership and global remit, to provide leadership and coordination to combat this pressing problem.

The IAP Statement ‘A Call to Action: Furthering the fight against falsified and substandard medical products’ was officially launched at the EuroScience Open Forum (ESOF),  the biennial, pan-European, general science conference dedicated to scientific research and innovation, that in 2020 took place in Trieste, Italy, from 2 to 6 September.

NOTE TO EDITORS: Under the umbrella of the InterAcademy Partnership (IAP), 140 national, regional and global member academies work together to support the vital role of science in seeking evidence-based solutions to the world’s most challenging problems. In particular, IAP harnesses the expertise of the world's scientific, medical and engineering leaders to advance sound policies, improve public health, promote excellence in science education, and achieve other critical development goals. IAP academy members constitute more than 30,000 leading scientists, engineers and health professionals in over 100 countries.

Press contact:
Giovanni Ortolani, IAP Communications Assistant
Email: gortolani@twas.org
More information about IAP can be found at www.interacademies.org and on Twitter at @IAPartnership.

A Call to Action: Furthering the fight against falsified and substandard medical products
Announcing Institution 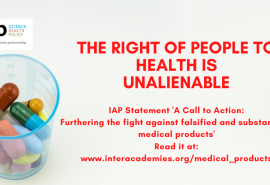 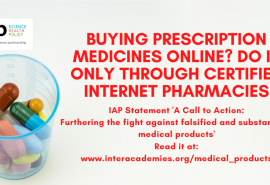