The 2018 Meeting of States Parties of Biological Weapons Convention was held Geneva, Switzerland, on 4-5 and 7 December. It followed on from the Meeting of Experts (MXP) held in August, when IAP hosted a side event, ‘Assessing Security and Governance Issues of Modern Biotechnology: Updates from Academies of Science’.

As well as reviewing the outputs from the MXP (available here: https://www.unog.ch/80256EE600585943/(httpPages)/C550A7F7B6D5A9A0C125830E002B2728?OpenDocument), the Meeting of States Parties discussed ways to advance the goals and ideals of the BWC, including its clause on ‘universality’. In this regard, it welcomed its latest signatory, Tanzania, as well as announcing the imminent ratification of the Convention by Haiti.

On 5 December, IAP was represented by its Coordinator, Peter McGrath, in a side event hosted by the US National Academies of Science, Medicine and Engineering (US NASEM). The aim of the session was to promote the release of a workshop report: ‘Governance of Dual Use Research in the Life Sciences: Advancing Global Consensus on Research Oversight’. The publication was developed following a US NASEM-sponsored meeting in Zagreb, Croatia, in June this year held in collaboration with IAP, the Croatian Academy of Science & Arts (CASA) and the Croatian Society of Biosafety & Biosecurity (CSBB). The book was published on 3 December.

James Revill, SPRU, University of Sussex, UK, rapporteur for the Zagreb meeting and principle author of the report, then outlined the main conclusions contained in the new publication. [Presentation James Revill]

Peter  McGrath, IAP Coordinator, then put this current report into the context of a long engagement by IAP and its member academies on the issue of responsible research practices and, especially more recently, examining the implications of new techniques in the biosciences such as genome editing and synthetic biology. [Presentation Peter McGrath]

Katherine Bowman, US NASEM, concluded the session with some take-home messages, highlighting various next steps for moving forward the discussions in this complex area. [Presentation Katherine Bowman] 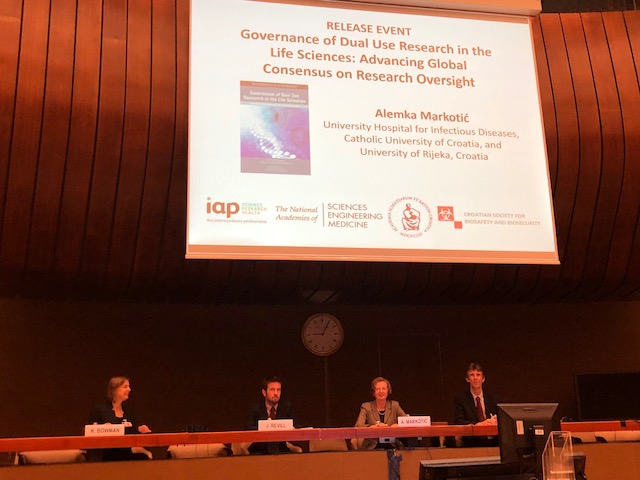 Some 60 participants attended the side event, including State Party representtaives from Australia, China, Italy, Malaysia, Russia, Saudi Arabia, the UK and the USA. In addition, organizations such as OPCW and ICGEB were also represented.

During the following discussion, the issue of codes of conduct in the life sciences arose, and how to ensure that all scientists comply with them. (This was against the background of the previous week’s news that a Chinese scientist had produced gene-edited baby twins).

Another side event, ‘ EU Council Decision 2016/51 in support of the BWC’, took place the folowing day. Speakers reported, amongst other activities, on a series of EU-supported regional awareness-raising meetings that took place in Ukraine, Mexico, Jordan, South Africa and the Philippines during 2017 and 2018. US NASEM and IAP had assisted with suggesting speakers and identifying participants for these events. Indeed, two participants (from the Philippines and Thailand) at the most recent meeting in Manila, the Philippines (21-22 November 2018), were supported by IAP.

This side event in Geneva concluded with the news that the EU will likely shortly  confirm its continued support for the BWC and various activities to be undertaken by its Geneva-based Implemetation Support Unit (ISU). This news was warmly welcomed by many participants, especially against the background of an ongoing challenge for the BWC – that of Member States not paying their annual dues, which was hotly discussed during all the Member States’ plenary sessions.