Skip to main content
Share on
As Co-Chairs for the upcoming year, members chose Michael Saliba and Anindita Bhadra.

The Global Young Academy’s first-ever virtual Annual General Meeting (AGM) successfully concluded today, and included the election of new leadership. To represent and lead them through the upcoming year, GYA members elected leaders hailing from South America, Africa, Asia and Europe – a majority of whom are women – to the Executive Committee (EC), which is comprised of eleven members of which two are Co-Chairs.

As Co-Chairs for the upcoming year, members chose Michael Saliba (University of Stuttgart, Germany) and Anindita Bhadra (Indian Institute of Science Education and Research–Kolkata, India). Anindita and Michael both served as members of the EC last year. 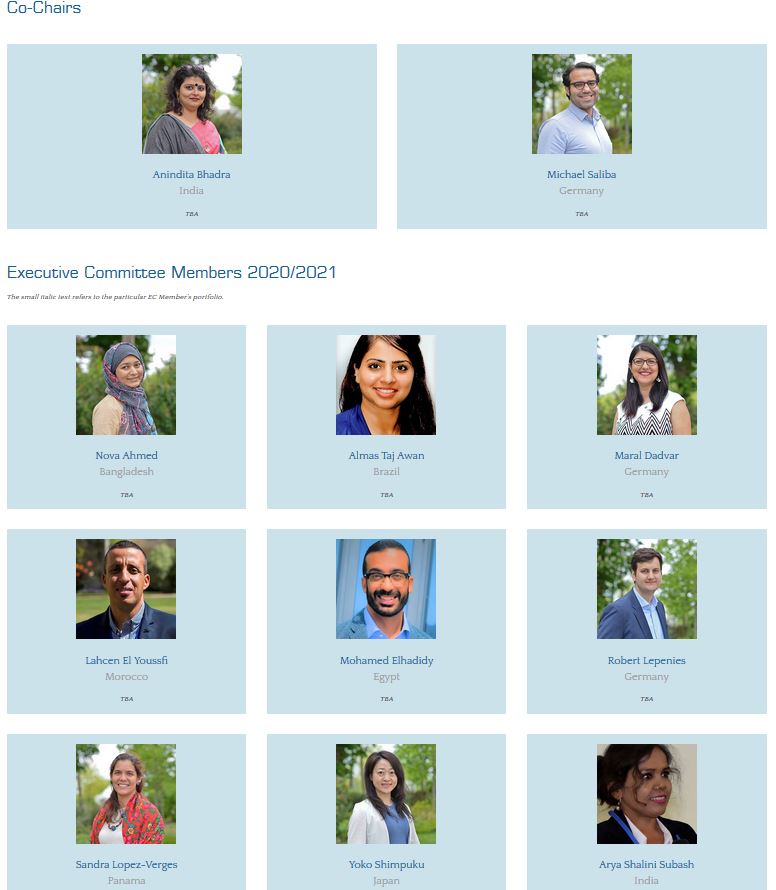 Looking at the year ahead, Co-Chair Anindita Bhadra states that, “The GYA strives to give a voice to young scientists, globally. Today, the world is facing an unprecedented crisis that requires inputs from all strata of society to heal the earth. With the young, global and dynamic nature of the GYA membership, we aim to bring fresh ideas and diverse perspectives for providing solutions towards major challenges like climate change, global health, education for all, diversity and social justice. We look forward to enabling our members and alumni to engage more with young scientists, policymakers and society worldwide to use the methods of science for building a better world.”

Co-Chair Michael Saliba adds, “Since its foundation in 2010, the GYA has given a voice to young scientists connecting nations, disciplines and people with diverse backgrounds. We are now looking forward to the next decade, where we want to be an optimistic and constructive voice in the dialogue about the most pressing issues of our days, from the corona pandemic, social justice for all, biodiversity and sustainability, to global warming using the GYA's core strength: diverse, international and excellent young scientists.”

Anindita Bhadra is a behavioural biologist, working with free-ranging (stray) dogs in India. She is a leading researcher working on free-ranging dogs and internationally acclaimed for her work. She loves teaching and is actively engaged in science outreach. She was involved in the founding of the Indian National Young Academy of Science (INYAS), and was elected as the first Chairperson by the founding members in June 2015. Anindita is an Associate Professor at the Department of Biological Sciences and the Associate Dean of International Relations and Outreach at the Indian Institute of Science Education and Research Kolkata. She is a recipient of the INSA medal for young scientists, India, Women Excellence award, India and IAP Young Scientist award. A mother of two, Anindita is also actively engaged in professional theatre.

Michael Saliba (@miliba01) is a full professor and director of the Institute for Photovoltaics (ipv) at Stuttgart University (@SalibaLab) with a dual appointment as Head of the Helmholtz Young Investigator Group FRONTRUNNER at the Research Center Jülich, Germany. Previously, he was a professor at TU Darmstadt, a Group Leader at the University of Fribourg, and a Marie Curie Fellow at EPFL. He completed his PhD in 2014 at Oxford University. His research focuses on a deeper understanding and improvement of optoelectronic properties of emerging solar cell technologies with an emphasis on perovskites for a sustainable energy future. He is a leading scientist in his field with over 100 publications in the topics of plasmonics, lasers, LEDs, and perovskite semiconductors. Michael is also an upcoming board member of the National Young Academy of Germany. In 2016, he received the Young Scientist Award of the German University Association. In 2017, the MIT Technology Review named him one of the World's "35 Innovators Under 35". In 2020, he was awarded the Heinz Maier Leibnitz Prize by the German Research Foundation (DFG) and selected as Young Scientist of the World Economic Forum.

This year’s in-person AGM and International Conference was meant to take place in Kolkata, India. However, the COVID-19 crisis made this impossible. In response, the GYA’s Executive Committee decided to create two virtual events so as to better delineate the internal and the public aspects of their annual gathering: the e-AGM for members and alumni only, and the International Conference “Heal the Earth: Sustainable Development Goals in a Changing World”. The e-Conference will be open to the public, and will run virtually from 29 June to July 10.

More information, including the e-Conference agenda, is available on our conference website: https://conference.globayoungacademy.net/

About the Global Young Academy

The Global Young Academy (GYA) was founded in 2010 with the vision to provide a voice for young scientists around the world. The GYA empowers early-career researchers to lead international, interdisciplinary, and intergenerational dialogue by developing and mobilising talent from six continents. Its purpose is to promote reason and inclusiveness in global decision-making. Members are chosen for their demonstrated excellence in scientific achievement and commitment to service. Currently, there are 200 members and 216 alumni from 83 countries. The GYA is hosted at the German National Academy of Sciences Leopoldina, and received its seed funding from the World Academy of Sciences (TWAS) and the Volkswagen Foundation. Since 2014, it has received core funding from the German Federal Ministry of Education and Research (BMBF) and is supported by the InterAcademy Partnership (IAP) and other international donors.