Skip to main content
Share on
Experts from more than 20 countries met at Leopoldina this week to discuss their findings on the ongoing IAP project 'Food and Nutrition Security and Agriculture'.

Our global population is growing; more and more people are moving to live in cities that are expanding to encroach on arable land; and urban populations, industry and agriculture are competing for available water supplies. Against this background, climate change threatens to affect food production and supply chains, and overcoming under-nutrition. 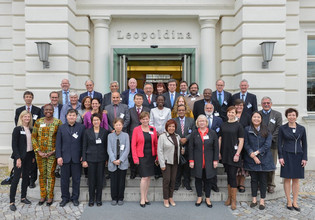 How do we ensure that all people, everywhere, have access to an adequate diet that fulfils all their nutrition requirements – while promoting sustainable agriculture and minimising impacts on the environment?

To answer these questions, and determine the most appropriate role of science in planning the way forward, IAP has initiated a major project on ‘Food and Nutrition Security and Agriculture’.

The project kicked off last year when a series of ten over-arching questions were developed. It then proceeded through a series of regional working group meetings in Europe, Africa, the Americas and the Asia/Pacific region (coordinated by IAP’s regional networks: EASAC, NASAC, IANAS and AASSA, respectively). Each working group has now developed a draft region-specific report.

This week (3-5 April 2017), some 40 experts from more than 20 countries, representing the four regional working groups, met at the headquarters of the German National Academy of Sciences, Leopoldina, in Halle, Germany. At the meeting, they compared and contrasted the four regional reports, and began to extract some common themes as well as region-specific issues that will feed into a global overview report.

Sheryl Hendriks, an agricultural economist representing the Academy of Sciences of South Africa (ASSAf) and lead author of the NASAC regional report, noted that food security and adequate nutrition are not only directly addressed by Sustainable Development Goals (SDGs) #2 (Zero hunger) and #3 (Good health and well-being), but also that individual targets are spread across all 17 SDGs.

“The SDGs provide us with a framework against which we must develop our advice to policy-makers,” she says.

Among the wide-ranging discussions, there was agreement that the food system needs to develop into a more circular and bio-based economy, especially by reducing post-harvest losses and food waste in the supply chain and people’s homes. Apparent dichotomies were noted, such as the fact that levels of overweight and obesity are often higher in poorer families because processed foods with high sugar content are often cheaper than fresher, more healthy alternatives.

While the regional reports and the ultimate global report are still being finalised, it is clear that there is a role for science in developing a holistic food system, for example by utilising new technologies to improve agricultural production (such as biotechnology or precision agriculture), and by highlighting areas where appropriate regulations need to be implemented (such as seed quality and initiatives to encourage people to switch to healthier behaviours). Likewise, there is a need for innovation and entrepreneurship to develop new food preservation and processing technologies so that the food that is grown can reach the markets. This will also create jobs – important in regions where there is a growing young population. Social scientists must work with governments and other stakeholders to devise the best ways to inform the public about healthy eating and ensure that all members of society, including the poorest and most marginalised, can access an adequate diet. And there is a need to use the opportunities provided by ‘big data’ to improve monitoring and evaluation of food chains.

“Not only the volume of science for food and nutrition security needs to expand, but also the cooperation between disciplines and between regions of the world, says Joachim von Braun, member of the EASAC working group. “While our European report will be firmly targeted towards providing advice to the European Commission, we have seen that other regions will prepare a series sub-regional ‘chapters’ that will suitably consider diversity.”

“There have been a number of other reports on food security and nutrition in recent years, published by the Food and Agriculture Organization of the United Nations (FAO), for example,” says Volker ter Meulen, co-chair of IAP and leader of the project. “But this is the first time that we are scoping the future from the point of view of science and identifying the key points where science and the scientific community can have an impact. We expect these four regional reports plus the global overview will become critical documents as we move forward through the course of the 2030 Sustainable Development Agenda and beyond.”

Following the workshop in Halle, the regional working groups have been tasked with finalising their reports. It is expected that the four regional reports will be available in early 2018, with the global overview to be launched 5-6 months later.

The IAP project on ‘Food and Nutrition Security and Agriculture’ is funded by the German Federal Ministry for Education and Research, and coordinated by the German National Academy of Sciences, Leopoldina.

Food and Nutrition Security and Agriculture