Skip to main content
Share on
Members of IAP’s Biosecurity Working Group convened in Geneva, Switzerland, this week to provide input to the Preparatory Committee for the 8th Review Conference of the Biological and Toxin Weapons Convention.

Members of IAP’s Biosecurity Working Group (BWG) convened in Geneva, Switzerland, to provide input to the Preparatory Committee for the 8th Review Conference (8-12 August) of the Biological and Toxin Weapons Convention (BWC).

The Preparatory Committee meeting convened many of the 175 States Parties that have ratified the convention – the latest additions, Angola and Cote d’Ivoire, signed earlier this year. The event was designed to pave the way for the 8th Review Conference of the Convention, which will take place in Geneva in November this year.

Among the main topics for discussion by the States Parties were the need to aim for universality of ratification of the BWC – some 20 countries still have not signed up – and the need for more effective input of the latest scientific developments and science advice from the research community to the States Parties. 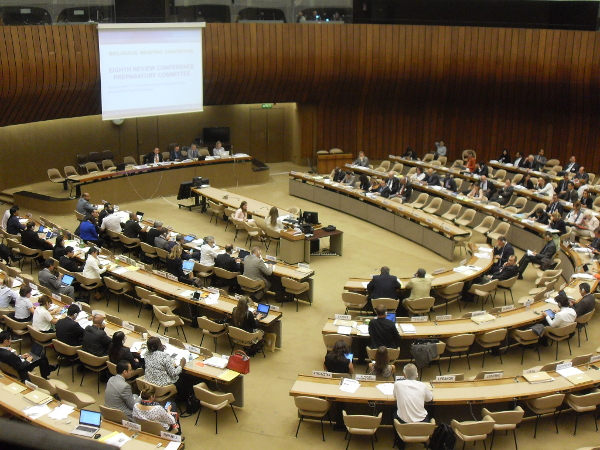 Among the proposals on the table, for example, is one from the Russian Federation to establish a Scientific Advisory Committee, although the exact ways it would operate are still to be defined.

On Monday 8 August, IAP participated in a side event hosted by Government of Ukraine, ‘Supporting Effective BWC Implementation: Education, Outreach and Policy Adviсe’. Among the speakers were Zabta Shinwari, who presented the Pakistan Academy of Sciences’ experience in raising awareness of dual use research among biotechnology students in remote areas of the country. Likewise, Serhiy Komisarenko presented the work of the Ukraine Academy of Sciences in raising awareness of ethics and scientific responsibility among the Ukrainian research community.  Moving from the work of individual academies to a regional network, Bert Rima gave an account of how the EASAC report on 'Gain of Function', with a focus on virology, came about and how it had been received, especially at EU level.  To round off the session, Peter McGrath gave an overview of the work of IAP and its member academies with respect to the interests of the BWC, highlighting its support for projects by individual academies such the Pakistan academy, its ability to convene the BWG and provide regular input into BWC sessions in Geneva, as well as seminal publications on research responsibility, including its latest book, ‘Doing Global Research’, published earlier this year. Among the more-than-60 participants were delegates from Belarus, Belgium, Ghana, Japan, Moldova and Pakistan.

The four presentations are available for download below, as well as from the BWC website:
- Bert Rima
- Peter McGrath
- Zabta Khan Shinwari
- Serhiy Komisarenko

Again in the plenary session, opportunities were provided to international and nongovernmental organizations (NGOs) to provide their input to the deliberations of the States Parties. Peter McGrath read out a prepared statement on behalf of the IAP BWG that recapped the efforts IAP has been making, especially the dissemination of responsible research practices. Indeed, both the International Committee of the Red Cross (ICRC) and Stanford University’s Center for International Security and Cooperation (CISAC) both supported IAP’s efforts, while agreeing that much more needs to be done to build awareness of the Convention and to systematically introduce the ideas of ethical and responsible research to young biologists in the 175 signatory states of the Convention.

It is expected that mechanisms to promote such outreach and awareness raising exercises will be developed and approved by the 8th Review Conference of the States Parties later this year.

Clich here for the Statement by The IAP Biosecurity Working Group