Agriculture is critically important for African societies and economies, butensuring food security for Africa’s growing population is a major challenge. One particular concern are pesticides called ‘neonicotinoids’, which render all parts of a plant toxic to all insects and contaminate the soil and water bodies. By exposing all organisms to the toxins, neonicotinoids also harm beneficial insects that provide many important ‘ecosystem services’,  such  as  pollination,  soil  development,  and  natural pest control, which are an integral part of sustainable agriculture.

Neonicotinoids have contributed to  the  loss  of  ecosystem  services  from  pollinators  and  other  insects  in  Europe  and  elsewhere,  and several  of  them  have  been  banned  in  the  EU  and  other  countries  due  to  their  harmful  effect  on beneficial insects. Africa, with its rich biodiversity and heavy reliance on agricultural production, is one of the fastest-growing pesticide markets in the world, so protecting it from the harmful effects of neonicotinoids is vital to ensuring a sustainable agriculture that provides food security.

The  Academy  of  Science  of  South  Africa  (ASSAf),  in  collaboration  with  the  German  National Academy  of  Sciences  Leopoldina  and  the  Network  of  African  Science  Academies  (NASAC)  has recently completed a project exploring the use and effects of neonicotinoids in African agriculture. This  project  brought  together  experts  from  17  African  countries,  reviewed  the  relevant  African scientific  literature,  and  analysed  the  state  of  knowledge  on neonicotinoids  and  their  impact  on ecosystem services for agriculture and onbiodiversity in Africa.

The resultant report has collated an unprecedented amount of information, identified gaps in scientific knowledge and research relating to neonicotinoids in Africa, and developed key recommendations from science to policy-makers to ensure the sustainability of African agriculture and thus food security.

This  event  serves  to  introduce  the  report,  including  an  update  on  recent  scientific  and  policy developments regarding neonicotinoids in Africa, and to discuss its implications with a wide range of stakeholders, with the aim of stimulating policy and researchaction on this important issue. The target  audience  and  participants include  South  African  and  Southern  African  Development Community  (SADC)  policymakers,  regulatory  agencies,  government  departments,  agricultural associations,  extension-service  providers,research  institutes,  international  development  agencies, representatives  of  embassies,  and  other  interested  stakeholders. 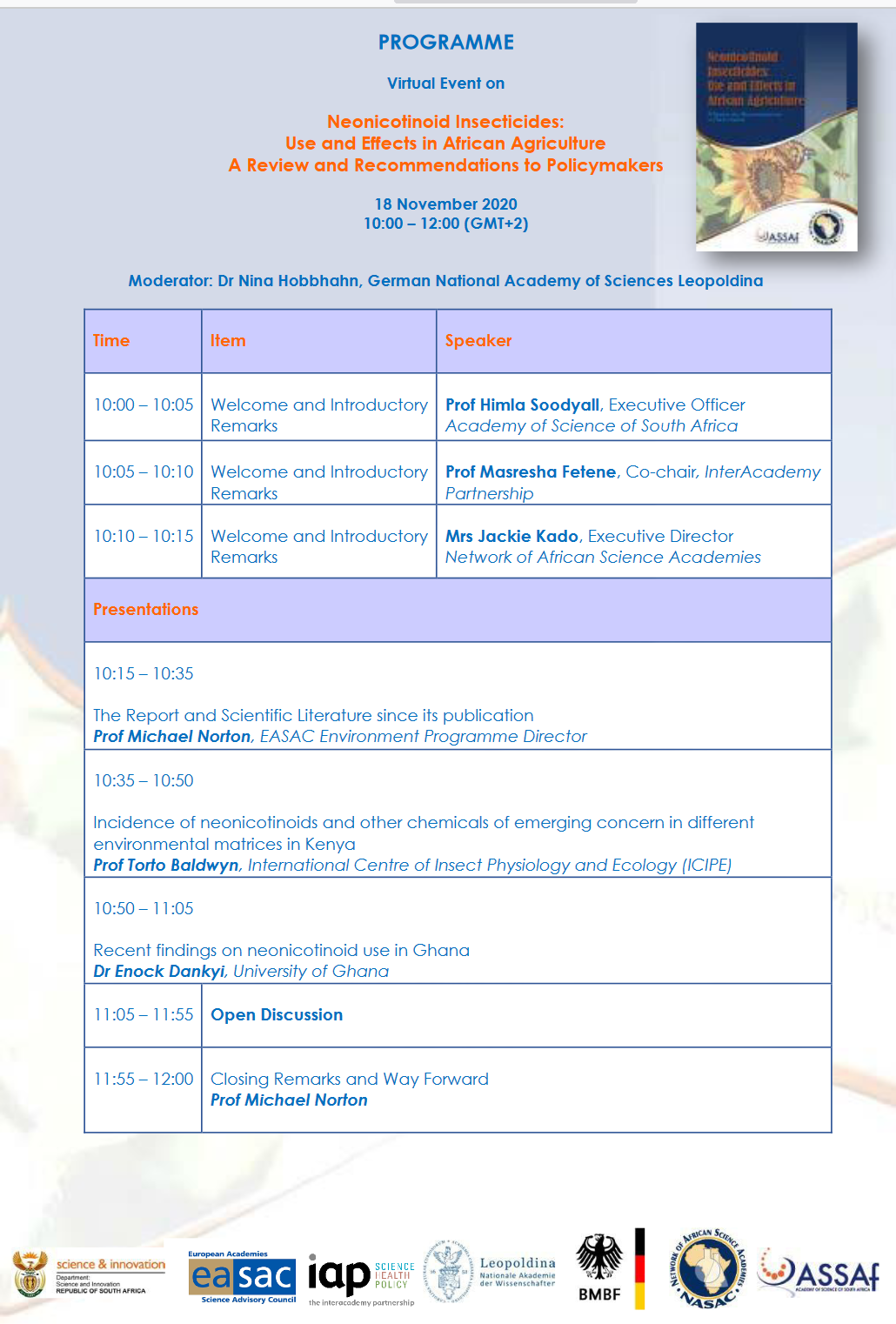