The Academy's goals are to enlist as its members distinguished scholars and scientists resident in Israel; to cultivate and promote scholarly and scientific endeavor; to advise the government on activities relating to research and scientific planning of national significance; to maintain contact with parallel bodies abroad; to ensure the representation of Israeli scholarship and science at international institutions and conferences; to publish writings calculated to promote scholarship and science; and to engage in any other activity serving the aforesaid objectives. 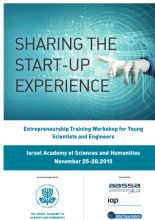 Israel Academy of Sciences and Humanities