UN Technology Bank and The Network of African Science Academies (NASAC) continue to support LDCs in establishing academies of sciences. The partnership has supported the launch of the Academy of Sciences in Malawi, an independent organization intended to promote science and engineering and strengthen their influence in Malawi. The Academy will contribute towards the implementation of the Malawi 2063 led by the National Planning Commission. The Ministry of Education's Directorate of Science, Technology, and Innovation (DSTI), and the National Commission of Science and Technology will also support the Academy towards meeting the strategic and development goals under the theme 'Science Driving Malawi Towards 2063 Agenda'.

The UN Technology Bank works to support the establishment and strengthening of the capacities of Academies of Science in the least developed countries (LDCs) to play a critical role in advising governments on Science, Technology, and Innovation (STI) policy development and implementation to address socio-economic challenges and promote development.  The launch is the beginning of a long-term vision that requires both political will and financial support to fully achieve the aspirations of Malawian scientists throughout the world.

The Academy of Sciences in Malawi will promote excellence in scientific research conducted by scientists who are citizens of Malawi and foster contacts and collaboration among and between scientists and the broader global scientific fraternity. The Academy will also advise the government of Malawi on scientific aspects of social and economic issues and all matters related to science teaching, research, and science education. The Academy will promote STEM to the youth as well as use science to empower women.

"The Academy of Sciences in Malawi is being established within a national and regional context to help lift our national capacity for science and so contribute to addressing our national and regional socio-economic challenges. In so doing it is important that the Academy, while safeguarding its independence, works closely with government bodies responsible for, and interfacing with, science and technology, such as the Department of Science, Technology and Innovation (DSTI) in the Ministry of Education, the National Commission for Science and Technology and the National Planning Commission," said Hon. Agnes NyaLonje, Minister of Education.

The Academies of Science are essential sources of current and emerging leaders in science, engineering and medicine, and advocates for STI. They are also think tanks made of the top scientists in the country, the engagement with the private sector, civil society, and the diaspora.

"The support of the Technology Bank has been towards the preparations of the constitution, constitution reviewed online and adaption by a plenary of scientists in-country. It is important that the Academy becomes a legal entity, develops the strategic plan, prepares a resource mobilisation strategy to ensure its sustainability, and maintains its independence. Reaching these milestones will allow Academy to become a provider of scientific advice to the government of the Republic of Malawi towards the attainment of Malawi 2063," said Joshua Setipa, Managing Director of the UN Technology Bank.

“Establishing the Academy of Sciences in Malawi is a long-term commitment by African scientists to promote scientific excellence and support science-informed development,” stated Prof. Norbert Hounkonnou, President of Network of African Academies.

Prof. Richard Catlow, Co-President of the InterAcademy Partnership (IAP) highlighted, “Academies play a vital role in their national and global community. They can help strengthen the scientific infrastructure of a nation or region by promoting and advising on science education and acting as an advocate for the value of the investment in scientific research. Moreover, they have the credibility to inform the public and policy-makers about problems and potential solutions. Their credibility comes from the scientific excellence of their members and the fact that they are free of vested political and commercial interests. The Interacademy Partnership is delighted to welcome the Academy of Sciences in Malawi, and we look forward to working with you as a fellow member of that community.”

The Academy of Sciences in Malawi should affiliate with regional and continental academies of sciences as a reservoir of advice, strategic leadership, and expertise. African academies play an important role in supporting SDGs and STI Strategy for Africa 2024 (STISA-2024). In 2020, the Angola Academy of Science was launched followed by Lesotho and the Democratic Republic of the Congo in 2021. The launch of the Academy of Sciences in Malawi will be followed by the Central African Republic, Cambodia, Chad, Liberia, Niger, Sierra Leone, and the Solomon Islands during 2021. 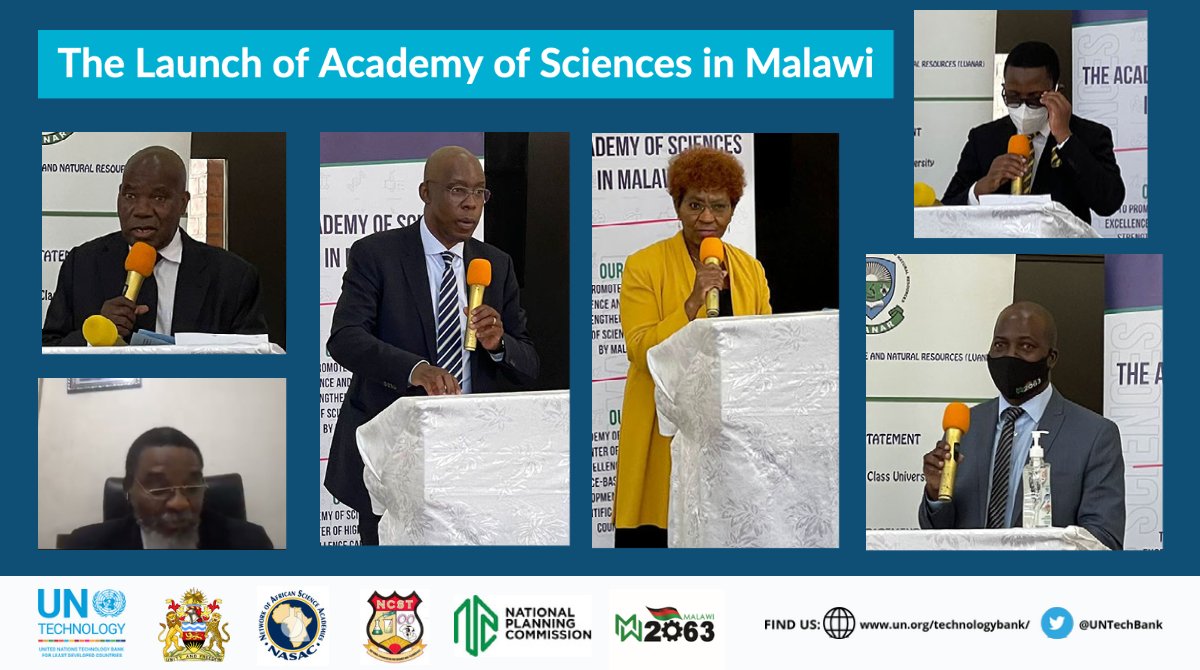