OWSD, the Organization for Women in Science for the Developing World, held its 6th General Assembly and International Conference from 8-19 November, 2021. More than 1,500 OWSD members—women scientists from developing countries around the world— participated in this online event.

Among them, there were also members of OWSD National Chapters hosted by IAP member academies, namely the Brazilian Academy of Sciences, Akademi Sains Malaysia, Palestine Academy for Science and Technology and National Academy of Sciences of Sri Lanka.

OWSD is affiliated with The World Academy of Science (UNESCO-TWAS) and is based in Trieste, Italy.

The conference took place almost entirely online for the first time in OWSD’s 28-year history, allowing as many of OWSD's 7600+ members to participate as possible.

“It is unlikely that there has ever been such a huge gathering of accomplished women scientists from the developing world sharing their research results, as well as their dreams for improving the sustainability of their communities,” said OWSD Coordinator Tonya Blowers.

Alberto Quadrio-Curzio, renowned Italian economist and President Emeritus of the Italian Academy of Science, presented a special edition of the Economia Politica journal, focusing on 'Pandemics, women and the Global South'.

OWSD members presented their own research in the four themes during poster sessions throughout the conference.  All members also had the opportunity to take part in a workshop on increasing their visibility and impact as a scientist, with a session on using podcasts for storytelling by Joy Owango and Adelle Onyango of the Training Centre in Communication (TCC Africa), followed by a session on filmmaking for impact by Nicole Leghissa, OWSD video consultant.

Following welcome remarks, the opening ceremony included a handover of the previous OWSD Executive Board to the new EB members, elected in June-July 2021.

Also announced during the opening ceremony was the funding by the Aspen Institute Italia of one OWSD Early Career fellowship. This fellowship provides young women scientists in developing countries with a USD $50,000 research grant over 2 years, as well as training in leadership and management skills.

Happy to be at the 6th @OwsdSecretariat General Assembly here in #Trieste! pic.twitter.com/IRl5xxnTLW 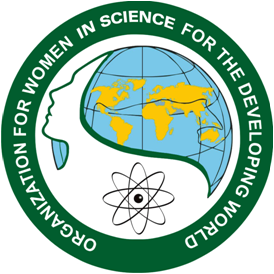 Organization for Women in Science for the Developing World (OWSD)